It’s that time again as we prepare for our Rose & Garden Show 2019.  A few favorites from the past.

In our eyes, nothing is more beautiful than the blooms of roses and peonies…our favorites! So then, a few rose delights for the eyes and thoughts for the heart!

But I send you a cream-white rosebud
With a flush on its petal tips;
For the love that is purest and sweetest
Has a kiss of desire on the lips.

I am in the city this week but the Promise Gardens are not far from my mind.  I am so excited about the recent finds to complete the new Secret Garden and Shabby Chic outdoor studios.  The bicycle posted below became a quest for me and at the most unexpected place, I found the perfect bicycle.  I will not describe but will surprise you when completed and in its proper place in the gardens.

Colder weather has brought low temps at night but the roses are screaming to bud and I believe they will be earlier this year.  Did you see them last year?  Here’s an image from one of the rose gardens last year which I have uploaded to my Pinterest.  This is the antique rose garden and the wonderful Rosa Munda has preeminence.

In the Promise Gardens, rose promises come true.  Our English roses are successful here because 1) they are loved and cared for 2) the have a healthy garden environment and 3) they are David Austin Roses.

We have over 250 roses and 70 are English roses and we absolutely love their prolific blooming and rambling look of pleasant softness and sweet aroma.  They are an integral part of our rose gardens.

Pictured here is Skylark…a beautiful luminous pink that is perfect in the garden and next to lavender, white peonies and lime green/silver foliage a knock-out color combination that will wow both outdoors and indoors.  The description of this lovely rose is here.

Visit David Austin Roses and you will see why I love them so!

The Promise Gardens “Porch With A View’ — the new look for 2011 “Rose & Flower Show” and 2011 Season.   What’s new?  A lovely vintage trellis that will soon be covered with Blaze Climbing Roses and Purple Clematis.  A new potting table filled with lovely things and soon overflowing flowering plants.  The theme colors this year:  Purples, Aqua, Cream, Pale & Power Pinks and of course lots of shades of green.  The image reflects just a few areas of the porch…watch for more.   Happy Gardening (and viewing)!

A red rose and poem for your June 1!  It is a time for roses, weddings, strawberries and all things joyful!  Photographing my Promise Gardens is a delight of sight, color and sound. Magnificent is God’s creation. I have dressed this rose already in glorious array in royal radiance!

ROSES, their sharp spines being gone,
Not royal in their smells alone,
But in their hue;
Maiden pinks, of odour faint,
Daisies smell-less, yet most quaint,
And sweet thyme true…
_William Shakespeare 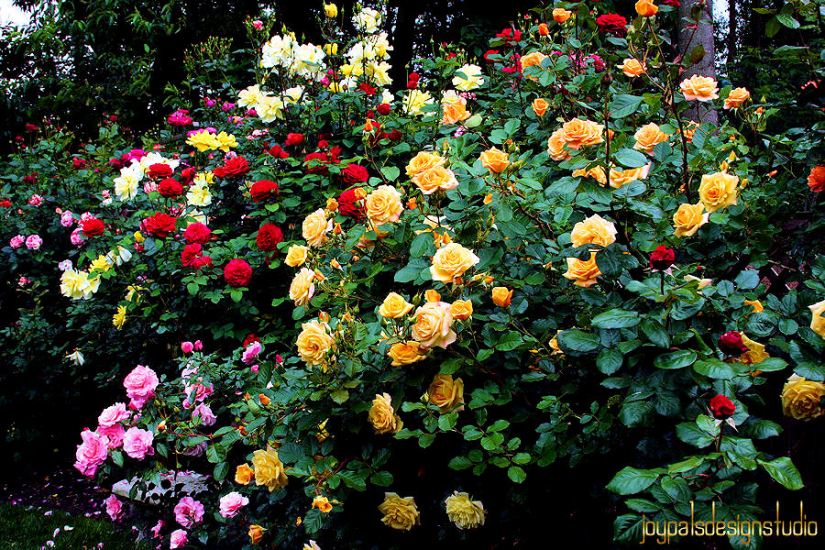 The church may be compared to a “rose”, for its beautiful colour and sweet odour, and for its delight in sunny places, where it thrives best, and is most fragrant. This figure is exceeding just; not only the beauty of women is expressed by the colour of the rose, as is common in poems of this kind; to give instances of it would be endless ; some have had the name of Rhoda from hence; see Act_12:13. No rose can be more beautiful in colour, and delightful to the eye, than the church is in the eyes of Christ, as clothed with his righteousness, and adorned with the graces of his Spirit: nor is any rose of a more sweet and fragrant smell than the persons of believers are to God and Christ, being considered in him; and even their graces, when in exercise, yea, their duties and services, when performed in faith; and, as the rose, they grow and thrive under the warming, comforting, and refreshing beams of the sun of righteousness, where they delight to be. The church may also be compared to a “lily of the valleys”, as she is, in the next verse, to one among thorns. This is a very beautiful flower; Pliny says it is next in nobleness to the rose; its whiteness is singularly excellent; no plant more fruitful, and no flower exceeds it in height; in some countries, it rises up three cubits high; has a weak neck or body, insufficient to bear the weight of its head. The church may be compared to a lily, for her beauty and fragrance, as to a rose; and the redness of the rose, and the whiteness of the lily, meeting in her, make her somewhat like her beloved, white and ruddy; like the lily, being arrayed in fine linen, clean and white, the righteousness of the saints; and like it for fruitfulness, as it is in good works, under the influence of divine grace, and grows up on high into her head, Christ Jesus; and though weak in herself, yet strong in him, who supports her, and not she him: and the church may be compared to a “lily of the valleys”; which may not describe any particular lily, and what we now call so; but only expresses the place where it grows, in low places, where plants are in danger of being plucked and trodden upon; though they may have more moisture and verdure than those in higher places; so the church of Christ is sometimes in a low estate, exposed to enemies, and liable to be trampled and trodden under foot by them, and to be carried away with the flood of persecution, were it not guarded by divine power; and, being watered with the dews of grace, it becomes flourishing and fruitful. But the more commonly received opinion is, that these are the words of Christ concerning himself; and which indeed best become him, and are more agreeable to his style and language, Joh_14:6; and suit best with the words in the Son_2:2, as one observes; nor is it unfitly taken by the bridegroom to himself, since it is sometimes given by lovers to men. Christ may be compared to a rose for its colour and smell; to the rose for its red colour: and which may be expressive of the truth of his humanity, and of his bloody sufferings in it; and this, with the whiteness of the lily, finishes the description of him for his beauty, Son_5:10; and for its sweet smell; which denotes the same things for which he is before compared to spikenard, myrrh, and camphire. The rose, as Pliny says, delights not in fat soils and rich clays, but in rubbish, and roses that grow there are of the sweetest smell; and such was the earth about Sharon; and to a rose there Christ is compared, to show the excellency and preferableness of him to all others. The word is only used here and in Isa_35:1. Where it is in many versions rendered a “lily”: it seems to be compounded of two words; one which signifies to “cover” and hide, and another which signifies a “shadow”; and so may be rendered, “the covering shadow”: but for what reason a rose should be so called is not easy to say; unless it can be thought to have the figure of an umbrella; or that the rose tree in those parts was so large, as to be remarkable for its shadow; like that Montfaucon saw, in a garden at Ravenna, under the shadow of the branches of which more than forty men could stand: Christ is sometimes compared to trees for their shadow, which is pleasant and reviving, as in Son_2:3. Some render it, “the flower of the field”; which may be expressive of the meanness of Christ in the eyes of men; of his not being of human production; of his being accessible; and of his being liable to be trampled upon, as he has been. And as he is compared to a rose, so to a “lily”, for its colour, height, and fruitfulness; expressive of his purity in himself, of his superiority to angels and men, and of his being filled with the fruits and blessings of grace; and to a lily of the valleys, denoting his wonderful condescension in his low estate of humiliation, and his delight in dwelling with the humble and lowly: some render the words, “I am the rose of Sharon, with the lily of the valleys”; by the former epithet meaning himself; and by the latter his church, his companion, in strict union and communion with him; of whom the following words are spoken. __John Gill

There might be snow and ice in the Promise Gardens now but soon it will be overflowing with gorgeous spring flowers, glorious shades of greens and pastels and a promise of more to come!  We begin our work now to prepare for the Annual Rose & Flower Show in the Promise Gardens.  Stay tuned for many lovely things!